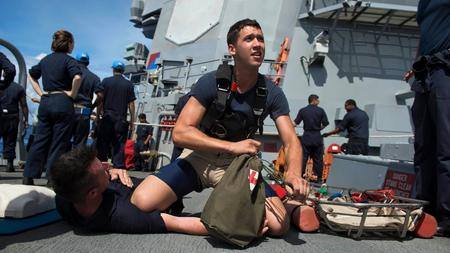 One of our members lost a dear relative in the horrible accident aboard the USS John S. McCain. Petty Officer 3rd Class Dustin Louis Doyon, of Suffield, Conn., is the nephew of Jacki Mortenson. Jacki shared with me that he was a 26 year old Electronics Technician. Although his field was IT and electronics, he was also trained as part of the rescue team.  When their ship impacted the freighter, it collapsed the hull in a forward movement (pushing the hull into crew occupancy).  The impact was at the waterline causing the berth facilities to flood. A majority of the ship’s doors below the waterline are closed at all time to prevent a ship from sinking, if there is a breach in the hull.  At 5:45, 15 sailors were sleeping in this area.  5 escaped death and remain in the hospital.  10 most likely drown. 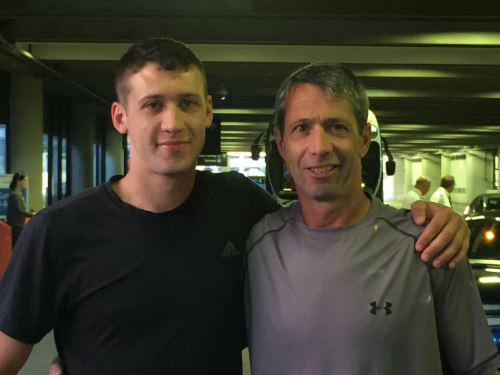 Dustin’s dad, is Jacki’s step-brother, Brian. He too was in the Navy, as a Seabee in the 80’s. On last Friday morning the family issued a statement through the town of Suffield that called Doyon "a wonderful son, big brother, and sailor," and asked for prayers for the families of those still missing. "He truly loved his family, the Navy and his shipmates. We are incredibly proud of him and his service to our country," the statement reads. "We will miss him immensely and we are so very thankful for the 26 wonderful years we had together."

The Governor of Connecticut ordered flags to half mass last Friday in honor of Dustin. I am hanging the flag on my house in his honor.  We all join with the U.S. Navy, the state of Connecticut, the Doyon family, Aunt Jacki, and many more to thank God for the dedication Dustin and all of our military who keep us safe, at risk to their own lives. We echo the thoughts of Governor Dannel Malloy he stated:

"It is with tremendous sadness that we mourn the loss of Petty Officer Doyon and his fellow shipmates, who gave their lives serving our nation. Petty Officer Doyon is an American hero who represented the best of Connecticut and the United States. This loss reminds us of the dangers faced day and night by the men and women of our military who are stationed overseas. Our hearts are with his family and friends during this difficult time - they should know how incredibly proud the people of Connecticut are of his service to our country."

We are truly proud of all those who serve and have served to keep us safe, and we offer our condolences to Jacki and her entire family.